Official: Lada steps into the present with Xray Concept

We've seen the tactic plenty of times before: an automaker that wants to up its game, so it hires a designer from a brand it seeks to emulate, then releases concepts that make people go "Ooh la la." Lada is the latest, having hired Steve Mattin to be its design head. Mattin is coming off tenures as senior designer at Mercedes-Benz and chief designer at Volvo before emigrating to the Russian side of life (although the company's design bureau is in Milan, Italy).

The new Lada he wants to introduce us to is led by an X-shaped front fascia on the Xray concept just unveiled at the Moscow Motor Show. The frontal treatment is to be the signature face for Lada's coming production models, but the Buck Rogers cockpit probably won't make it to the assembly line.

Lada is obviously proud of its creation, having unleashed a giant gallery of photos taken from just about every possible angle. If they can keep this up and translate it to their production vehicles, well, the Volga might go back to just being a river and not also a punchline.

Lada steps into the present with Xray Concept originally appeared on Autoblog on Fri, 31 Aug 2012 16:31:00 EST. Please see our terms for use of feeds.

Posted by etherealtemptat at 2:30 AM No comments:

Suzuki presented at the Moscow Motor Show the facelift for the aging Grand Vitara.

Posted by etherealtemptat at 12:30 AM No comments: 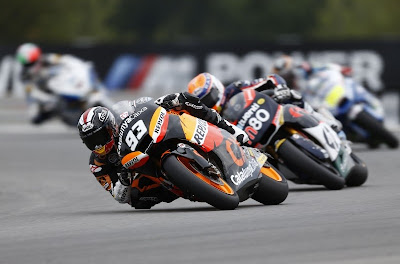 Marc Marquez (Team CatalunyaCaixa Repsol-Suter) won a tense four-way tussle with Thomas Luthi (Interwetten-Paddock-Suter), Pol Espargaro (Pons 40 HP Tuenti-Kalex) and Andrea Iannone (Speed Master – Speed Up) to take his sixth victory of 2012 in the always thrilling Honda-powered series. Marquez’s winning margin over Luthi was just 0.061s, while the four riders were covered by just half a second. With six races to go, Marquez heads Espargaro by 48 points.
The ever-impressive Marquez played his hand perfectly, spending nearly all the race in second place, while Luthi did all the leading. Right behind them Espargaro and Iannone swapped places frequently. Both of them briefly made it into second place but didn’t quite have the pace to stay there.
Marquez made his winning move at turn three with three laps to go, sweeping past Luthi, backing into the corner and yet keeping his Suter perfectly on line. Luthi was able to stay with the 19-year-old and tried everything he knew to retake the lead but couldn’t quite make it.
The duel between Espargaro and Iannone was just as intense, and complicated somewhat when Espargaro made a pass under yellow flags. He was ordered to drop back to fourth to escape punishment and although he tried everything to get back on terms with the leading duo – including setting the fastest lap – he could not get close enough to attack. Espargaro finished less than three tenths behind Luthi, with last year’s Brno winner Iannone less than a tenth further back in fourth.
Marc Marquez, Team CatalunyaCaixa Repsol-Suter: race winner
“Yesterday in practice I felt very comfortable; I knew that I was ready for the race and that I could be up at the front, and also that nobody could escape with us all running a similar pace. That was how it panned out, because there was less grip today, but I still rode comfortably. That was how I was able to study Luthi over the course of the race. The pace was slower than I had expected and I was able to make a plan for the final laps. When there were three to go I gave 100% to get in front, then on the last lap I closed every door in order to win. It was a different tactic to normal, but this track is a difficult one for me and I wanted to keep something in reserve.”
Catalunya Caixa Repsol Moto2 Press Release

Posted by etherealtemptat at 10:30 PM No comments:

Posted by etherealtemptat at 8:30 PM No comments:

Suzuki presented at the Moscow Motor Show the facelift for the aging Grand Vitara.

Posted by etherealtemptat at 6:30 PM No comments: 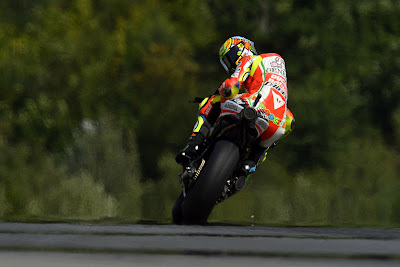 INbolnet -   Valentino Rossi intention to finish closer to the leading rider in the MotoGP dashed Republic, Sunday (26/8). In the race, his bike Desmosedici GP12 oil leak.

Smoke seemed out of the motor Rossi throughout the race. Although the oil leak does not affect engine performance, Rossi run into problems when the oil begins to flow into the stirrups.

"I did a good start. Stage early in the race is not too bad although my bike is leaking oil," said Rossi. "Oil flows into the footrest and brake lever.'s Very disturbing."

In the race, Rossi was sent had to settle for fifth place finish in seventh position. "If there is no problem, maybe I can finish better than Andrea," said Rossi, Andrea Dovizioso mention who finished fourth.

Italian rider also states that the rear tires lose grip and hold the bike. "I also have to go much slower because the rear tires always have slippage. That's always been an issue with us," added the Doctor.

Rossi and Ducati do not undergo the official MotoGP test held in the Czech Republic on Monday (27/8). They will conduct a closed test circuit in Misano, San Marino on 28-29 August.

Posted by etherealtemptat at 4:30 PM No comments:

August has been rough month for German automakers as Gumpert has joined Melkus by filing for a provisional insolvency.

Posted by etherealtemptat at 2:30 PM No comments: